My son loves to dance and he’s really good at it.  He doesn’t need music, he spontaneously gets up and starts to move to the songs and the rhythm that is in his head at the time.  His moves are his own, he’s not on TikTok and doesn’t copy off music videos.  Sometimes he doesn’t even know he’s doing it, it’s just in him, he has a talent.

When I first started to encourage him to start dance classes I asked him why he didn’t want to give them a go.  He said, “Dance classes are for girls.”  So, I said to him, “What makes you think dancing is for girls? Girls play football and rugby.  Why can’t boys dance?” He replied, “None of my friends go dancing, dad doesn’t dance!”  In other words, I don’t see other boys like me dancing, so dancing isn’t for boys.

I felt like crying.  I’ve been a kid’s researcher for 22 years, read hundreds of books, been on parenting and child development courses, brought up three children now age 22, 12 and 10.  I feel like most of the time I’m quite a good mum having  always encouraged my kids to do the things that makes them happy (something that might come back to bite me as budding actors and artists!).

Yet in that moment I realised that the thing stopping my boy doing what makes him happy isn’t something I have control over…it’s something that goes far deeper than a few encouraging words from a parent can ever fix……something that has been influencing our choices for centuries.  I was unable to help my son feel like it was ok to do what he loves because society has told him that ‘boys don’t dance’.

The point I’m trying to make isn’t simply about getting more boys into dancing.  It’s much bigger than that.  It’s about re-balancing gender stereotype on BOTH sides.

It is clear that girls are finally being given permission to do the things they want to do….football, rugby, engineering, science….whatever it is, there is a lot of work being done (and rightly so) to give girls the courage and encouragement to do what they WANT to do, not what was previously believed girls SHOULD be doing.  Girls are gaining LOTS of visibility of other girls and women, strong female role models who have felt free to follow their own path.  Yes, there is still a long way to go but the work has begun, and it is making positive changes.

But are boys being given the same permission to do the things they want to do?  I fear not, which means if only one side of the equation is balanced, it’s not a balanced equation!  Whatever we do to one side we must do to the other….

Being a researcher, I wanted to find out just how big the problem is.  How many other boys feel like they are not able to be themselves because they believe they SHOULD act a certain way?  In our last round of research, myself and the other researchers at Platypus spoke to 1000 boys aged 4-13 years old.

We found that a half of boys haven’t tried certain activities because they think they’re for girls – dancing, singing and gymnastics were the main ones.

In and amongst the masses of data we collected, we found some really telling insights that point to the fact that the gender equation is definitely not balanced.

We asked our 1000 boys to choose three things from a list that they think makes them popular. Here’s the worrying bit….

So, what is this telling us?  That if you are a boy, and you want to be popular, don’t be nice and don’t be clever, instead play it cool, laugh everything off and focus on sport.  I think my husband may have read the book on how to be a popular boy!

Joking aside, this is not a good thing and if these perceptions start so young there is no wonder why we’re seeing so many serious issues with mental health among men as well as problems in them accessing education.

This isn’t something we can choose to ignore.

Myself and my colleagues at Platypus are on a mission to continue to find out more about how gender stereotyping is affecting boys as well as girls and what we can do to balance both sides of the equation.

If you’d like to join us on this mission, message me.  Our next round of research (delayed from April this year) is taking place soon.  We’d love you to be a part of it. 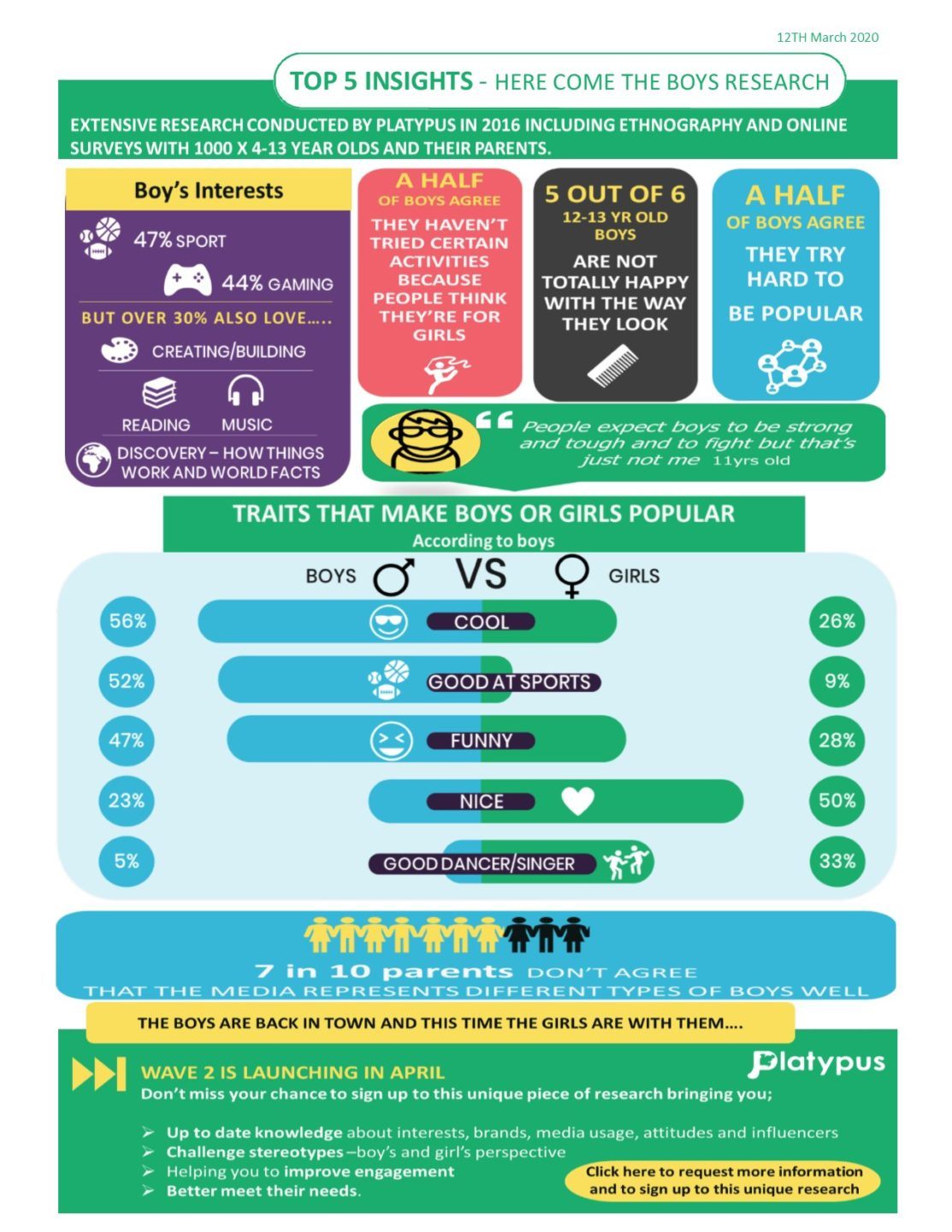 Platypus Research is a global insights and innovation business for the child, youth and family market.

To receive occasional updates from our blog, latest work and insights, please sign up using the link below.